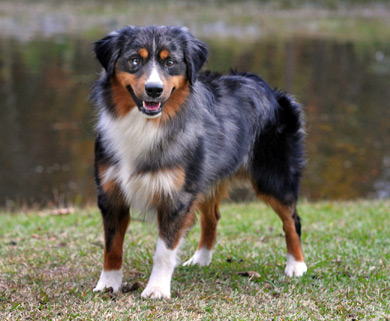 Kane made his show début at the Miniature Aussie Club show Halo Connection on 11/6/2010 in Champaign, IL. He won Best of Breed puppy in two shows. Kane is co-owned with Linda Medina and located in Savannah, GA. He went to his first show in the South in 2011, winning his group twice! Kane had incredible movement and presence in the show ring.

Kane has great side movement and he won a BIS at the ARBA show and a Reserve BIS in March 2011 at Ocala, FL. At the 2011 MASCA Nationals, he qualified in Scent and Find and had a great showing in his classes. Kane helped both of his parents to win the Brood Bitch and Stud Dog class at the 2011 MASCA Nationals. He obtained his MASCA Champion at 18 months of age. At the MASCA Show in Michigan, Kane took two Winner's Dog and a major win with a Best of Winners! Kane has been Canine Good Citizen and Therapy Dog International Certified.

Kane has been neutered and is now retired.

Kane with his sire Pilot and full brother Ref at the NAKC show in Feb 2011.

Kane is currently doing lots of exciting things but he loves herding. In November 2013 Kane completed his Pre Trial (PT) herding title in Hillard, FL. He continues to train towards his Herding Started (HS), which he will test for in February 2015. We are excited to have such a great competitor in herding with Kane.