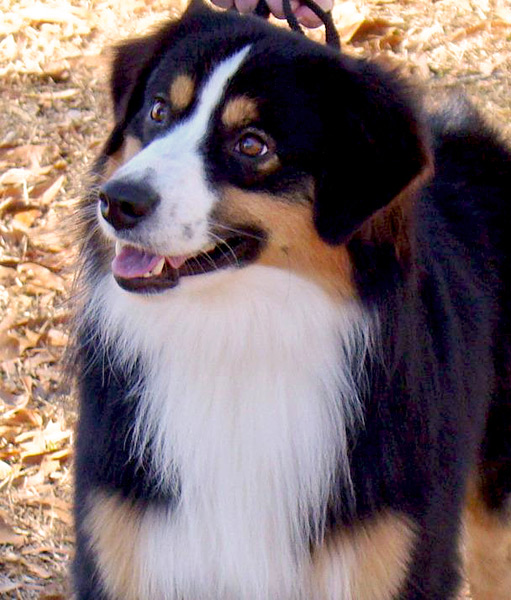 Ref is a black tri male from the Xena and Pilot cross. From the start, Ref showed us an outgoing and adventurous attitude along with a sweet disposition.

Ref made a great debut in the show ring in October 2010 at the IABCA show in Orlando. At his first show, he won three of his four classes and also took Reserve BIS Bred By Puppy! In his first ARBA show in Jan 2011, Ref took Winner's Dog six of six shows, Best in Breed in one show and a Reserve BIS. Ref followed up with a great show at the NAKC Palm Tree Classic, with Best Jr. Puppy in Breed, three Winner's Dog, two Best of Opposite Sex, Group One win, Best of Breed and a BIS Puppy! At the 2011 MASCA Nationals, Ref took the Reserve Winner's Dog and also qualified in Scent and Find. Before the age of one, Ref had completed four separate Championship Titles, with him obtaining enough points to become Kim's first homegrown MASCA Champion. Ref took a Best of Opposite Sex at the MASCA show in Michigan and also won Head Type. During the 2011 Show Season with ICKC/NAKC, Ref ranked number six in the Mini Aussies and was ranked in the top 25 for all breeds. For 2011, Ref ranked number 8 in MASCA, in the Top Ten for Merit Points. At his first show in 2012, Ref took three BOS, head type and movement. Ref was awarded his MASCA Grand Championship in April 2012. Ref passed his CGC and his Therapy Dog Certification. We are very proud of all his accomplishments.

Ref is red factored with a wonderful temperament, a quick mind, good drive and eager to please. He is registered as a Miniature American Shepherd and has shown in the Misc Group and has had mulitple Misc Best in Show wins. Since his start in September 2012 in the AKC ring, Ref obtained over 40 points with multiple MISC BIS wins and earning his Certificate of Merit in three months.

Ref produced some great offspring, nicely marked and great structure. Ref's pups from his first litter are doing some amazing things. It is great to see that Ref has outdone himself in his offspring. He is the sire to Remi, who is the 2013 Eukanuba Best of Breed winner and MISC BIS Winner. His son Desi is starting his show career. All of his pups have shown to be easygoing, athletic and have his wonderful movement. They have also stayed smaller in size.

His work with soldiers that suffer from TBI's and PTSD earned Ref the 2015 Goodwill Ambassador award for his contribution as an ambassador for the breed and his service to others. We are very proud of Ref's work. We are very honored to have Ref featured as the dog representing the breed standard in the 21st Edition of the AKC The New Complete Dog Book. What a honor!

Ref has retired from the show ring and has been neutered. He is now a beloved pet! Ref produced many Grand Champions, Champions and has offspring in many countries. He was a wonderful stud dog, who contributed much to the breed.

We are pleased to announce that Dynasty's Instant Replay, CGC, TDI "Ref" was the Best of Breed Winner for the 2012 AKC/Eukanuba National Championship, making history as the very first Miniature American Shepherd to win at Eukanuba. At the Misc Best in Show, "Ref" was selected in the Top Four Dogs in a group that has over 120 entries. Ref is handled by David Stout. Thank you to Judge Hiroshi Kamisato for this win. During the Pre-Shows, Ref also took a Best of Opposite Sex, 2nd in his class and 4th in his class. He placed in every show he was entered in.

Best of Opposite Sex at Kalamazoo March Madness

Referee is the first Miniature American Shepherd to be awarded the AKC Therapy Dog Title, which shows that he has completed over 50 documented visits. We are very proud of the work he does and the wonderful temperament he has to do this type of work.

Ref as a puppy