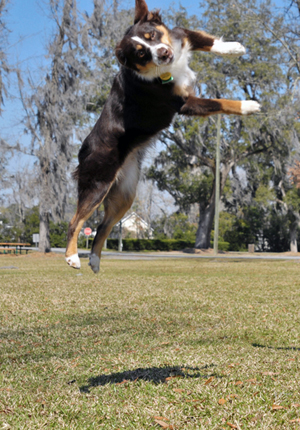 With great sadness, we announce the loss of our beloved Xena, who passed away on August 27, 2020. Xena lived to be almost 14 years old and stayed healthy until the very end. Her legacy will live on in the many generations of offspring. Her contribution to Dynasty and to the MAS Breed can't be measured. She was a treasured member of our family.

Xena was our first MASCA Hall of Fame Dam and she produced multiple champions. We couldn't be prouder of her accomplishments and the top quality she produced. Xena was a versatile girl - athletic, intelligent and aimed to please. She had been featured in the Mini Aussie Calendar for 2008 and also used in artwork for the 2007 Mini Nationals. Xena had a great time in the show ring and got excellent ratings from all of the judges. Xena's first litter produced two Champions at the age of eight months old. Kizzy is an IABCA puppy and International Champion and Tucker is a multiple CH, completing his MASCA, IABCA Puppy Championship and International Puppy Championship. He has multiple herding group wins and has competed in BIS puppy multiple times including a Pre Show Best of Breed Win at the 2011 MASCA Nationals. From Xena's second litter Ref had four Championship titles by the time he was one year old including his MASCA Championship. All of her pups qualified in Scent and Find at Nationals. Xena qualified in Acrobatics and Scent and Find at the 2011 Nationals and with her win as the 2011 Brood Bitch, she also won her "Underdog Award". In March 2012 a very pregnant Xena and her offspring brought home another MASCA Specality Brood Bitch win.

Xena gave us three wonderful litters of puppies. Xena fortunately passed on her dark red coloring to several of her pups and also her wonderful athletic ability. She was a wonderful mother and we are looking forward to continuing her line with her offspring. Once retired, Xena lived with Kim in Georgia and enjoyed her time keeping the squirrels out of her yard and keeping Ref and Remi in shape.

Xena with her pups at the 2011 MASCA Nationals

Xena with her pups

Xena with six of her pups at MASCA Nationals 2011. What a proud Mom!