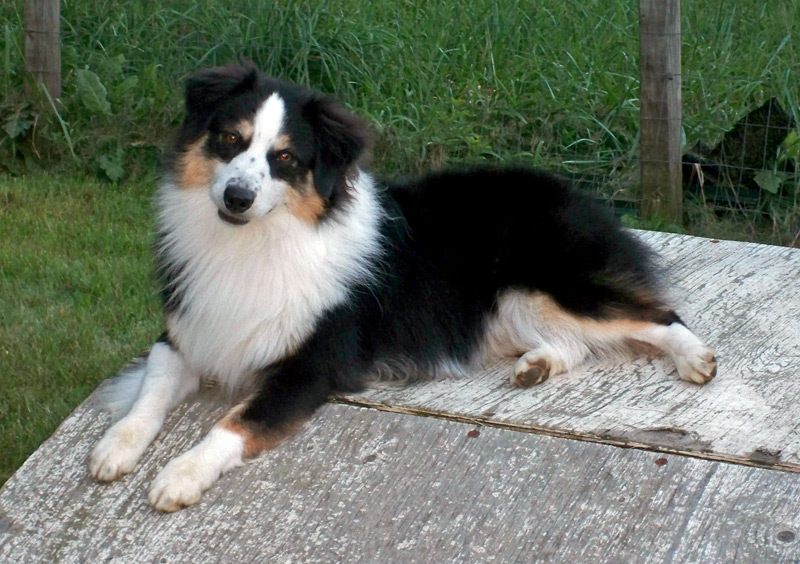 Desi is an easy-going dog, who aims to please. He has sired multiple litters, which produced some of the nicest puppies we have ever had. Desi has a very sweet nature and is such a happy guy! He enjoys each day to the fullest. Desi earned two five-point majors in his first weekend of showing in AKC, then went on to obtain his Grand Championship, even defeating his famous brother Remi a couple of times. He competed as a Juniors Dog, where he and Danny White were ranked the Number 2 Junior in MAS for 2015 and were ranked in the top 10 for 2016.

Desi is red factored and has a fantastic temperament that he has passed onto his pups. Desi is from Kyra and Ref's all tri litter born on 8/8/12. He is a full sibling to Remi. Desi has won multiple MISC BISs and also Best of Breed, starting with his first show in Atlanta in October 2013.

Desi has a wonderful outgoing personality and is everyone's friend. He is a happy-go-lucky dog with an attitude to please everyone. Desi is great with other dogs and never tries to be the head of the pack. He is compact with a beautiful head, nice angulation from his father Ref, a solid topline and very nice movement. He self stacks off lead almost every time he stops. He has good bone and lay back of shoulder.

Desi is now retired from the show ring and from breeding. He is living the good life with his full sister, Ranger, in Savannah. We are so proud of all that Desi accomplished and his contributions to our breeding program.

On 7/25/2015, Desi earned his Championship at Piedmont Kennel Club under Judge Ann Yuhasz. We are very proud to have Desi finish his title in such a short time and he is now working on his Grand Championship earning a Select his first day in Best of Breed.

Marisa Crowhurst doing a wonderful job presenting Desi at Eukanuba 2014. During the Pre-Show, Marisa and Desi won a Best of Opposite Sex.

As of this picture, he is 22 months old. Thank you Judge Sheila Polk for recognizing Desi in such a wonderful way, winning Best In Show Misc. at Kalamazoo, Michigan's Apple Blossom Cluster, which took place May 22-26, 2014. Desi received one Best In Show, one Best of Breed, and two Best of Opposite Sex at this show cluster. We are so pleased with his progress and expect a wonderful show career for him.

Desi's movement at the Bluegrass Classic in Lexington, Kentucky, 8/2014