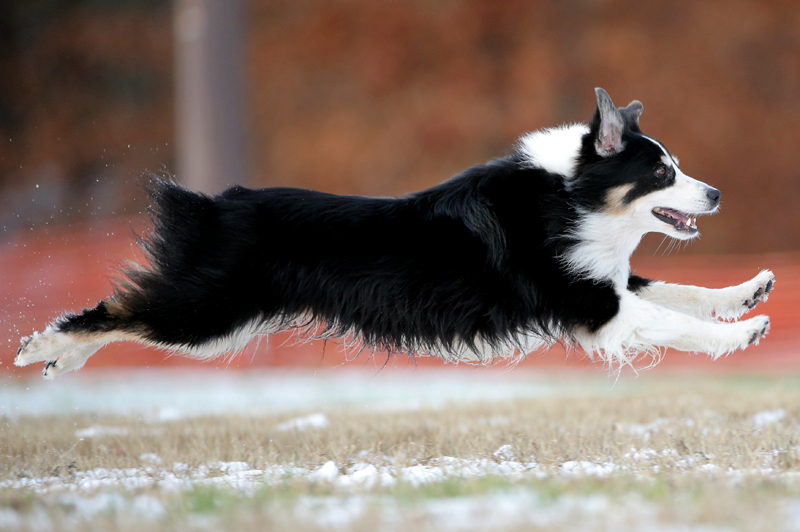 Remi is from Kyra and Ref's all tri litter, born on 8/8/12. Remi has amazing structure with tons of bone and wonderful angles on this boy. He has enjoyed the show ring and strives to please. Remi's top quality is his movement. As he would float around the ring, it was something to behold.

Remi has made his mark in the history of the MAS breed and he is honored to hold several records in the breed. He became the first Miniature American Shepherd to win Best of Breed at the prestigious Westminster Kennel Club in February 2016. He is also the first AKC Champion in the history of the breed and quickly moved on to become a Grand Champion within one month of full recognition. He is also the 2nd Gold Grand Champion in the MAS breed. Remi was the first MAS to win the Eukanbua Best in Miscellaneous in 2013, at just 15 months old.

Remi retired from the show ring in 2017. He was shown selectively in 2018 obtaining multiple group placements. Since his retirement, Remi has obtained his Barn Hunt Novice Title, Trick Dog Novice and is working on his Rally and Dock Diving. Remi has produced multiple Champion offspring and looks forward to coming out as a veteran in 2019.

He was Number 2 for Dog Breed Points and Number 4 for All Breed Points for 2015, earning over 100 AKC points in just 5 months of showing. Remi was the Number 3 dog in his breed for 2014, with 48 AKC points earned during the year.

Remi has had multiple Group Placements, including several Group One awards. 2016 was a wonderful year for Remi. He had his first Best in Show and a Reserve Best in Show. Remi also made the cut in a stellar group of dogs in the herding group at Madison Square Garden for the Westminster Kennel Club show in the breed's first showing at WKC.

Remi started his show career in March of 2013, winning MISC BIS in his first four shows. After taking the summer off, Remi returned to the show ring in October and quickly earned his first Certificate of Merit in November of 2013. Since that time, Remi has gone on to add 30 more AKC points, earning his MASCUSA Grand Championship before turning 18 months old. He is a Multiple MISC BIS winner and continues to improve as he grows up. Remi has a stunning side gait and has been praised by the judges for his movement. In Remi's first year of showing, he earned a spot in the MASCUSA Top Ten at #8 with 35 AKC points.

Remi is professionally handled by Arvind DeBragaca and is currently located in Savannah with Kim. He is standing at stud to approved females. Please contact Kim for information on his stud service. Fresh/Frozen and live cover is available for Remi to approved females.

Remi becomes the only BIS male Miniature American Shepherd in AKC breed history! It is an honor to have our very first Best in Show. Many thanks to Judge Mr. Bill Edwards for such a prestigious win. 6/3/16, Riverside West Kennel Club of Greater New Orleans, Inc., Biloxi, MS.

Remi earns Reserve Best in Show at Greater Kingsport Kennel Club under Judge Mr. Joseph Gregory on 5/21/16. He also won a Group 1, which was awarded by Judge Kenneth Buxton.

Remi has now started his veteran's career with a herding group win in Perry, GA in November 2019.

Remi in the show ring with Arvind DeBragaca.

Living up to his name, Dynasty's Triple Crown "Remi" won three consecutive Group 1's in the herding group at Blue Crab Cluster in Richmond, VA. His third Group One Award was under Judge Mr. Michael Canalizo on 7/3/16.

Remi wins Group 1 in the herding group at Blue Crab Cluster in Richmond, VA under Judge Dr. Carol White-Moser on 7/1/16.

Remi is awarded a Group 3 by Judge Jimmy Moses in a line-up of the top herding dogs at Brevard Kennel Club on 6/24/16.

Remi becomes the only Multiple Group Winning Male for the breed! Many thanks to Group Judge Mr. Michael Canalizo for such a prestigious win. 6/3/16, Riverside West Kennel Club of Greater New Orleans, Inc., Biloxi, MS.

Remi earns another Group 1 at the Myrtle Beach Kennel Club on 5/1/16. Thank you to Judge Mrs. Stephanie Hedgepath for this honor.

Remi lived up to his name of Dyansty's Triple Crown by making history again as the 1st MAS Best of Breed Winner at the prestigious Westminster Kennel Club under Dr. Robert Smith on February 15th 2016 in New York City. He then went to Madison Square Garden, where he was the only dog from the new breeds that made the cut in a group of superstar herding dogs.

Remi showing during the Herding Group at Westminster Kennel Club.

Remi competing in the Best of Breed at Jacksonville Dog Fanciers show, 9/2015.

Dynasty's Triple Crown, CM2 "Remi" had quite a week during the weeklong Eukanuba events. On Tuesday, took a 2nd place in the dogs. Wednesday, under Judge Helen Winski Stein, Remi won the Best of Breed. Thursday, under Judge Judy Webb, Remi took BOB and went on to win MISC BIS. Friday, he won the Open Tri Color male at our specialty. Sunday, Remi followed in his father Ref's footsteps and won the Best of Breed and went on that afternoon to win the MISC BIS under Judge Roberto Velez-Pico with over 100 entries.

It was a honor to compete against such a quality group of dogs and our young man who isn't 18 months old amazed us. We are so very proud of Remi who is a cross of Dynasty's Instant Replay, CM2, THD, CGC "Ref" and Dynasty's Kyra's Got a Wibblebutt, CGC, TDI. We are so very pleased with the comments from judges on his movement and structure. We are very thankful to Team Remi, which includes Emma Sunderman (his Jr. Handler), Arvind DeBraganca and David Stout (Handlers). Thank you to all of the competitors and for all the support we received from our club.

Remi completing his points for his CM with a MISC BIS at the Seminole Dog Fanciers Assoc. Thank you to Judge Col Joe Purkhiser for this win and to his handler for the great job he is doing with Remi.