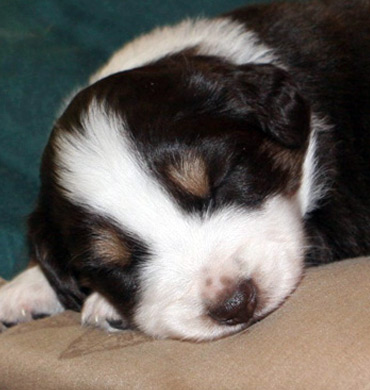 Tucker had an amazing show career and was a fantastic Juniors dog. Tucker is now retired and enjoying keeping a close eye on his family. He is red factored, loves his people and has a wonderful work ethic.

At the Kalamazoo show in Nov 2013 Tucker took two Best of Breeds and a Best of Opposite to his daughter.

At his first show in March 2012, Tucker took two Best of Breeds. He has been ranked in the Top Ten for Merit points for MASCA at number 9 for 2011. Tucker has won multiple Best in Breed awards and was awarded his MASCA Grand Championship in May 2012.

Cam and Tucker received the highest honor by winning Best Of Breed at one of the biggest shows of the year (show #4 of the pre shows) with 43 dogs and bitches competing! It was awesome to see our home bred young dog with his 14 year old co-owner/handler going up against some of the best dogs bred in America and beat everyone in the ring!

Tucker acquired his Underdog Award by qualifying in two events at one show.

The Parente Family are the proud co-owners of Tucker. Cameron is in our Jr. Showmanship Program. Tucker's first year of showing was been incredible; he became a triple Champion before the age of 10 months! Tucker loved to show and earned his MASCA Grand Champion Title before the age of 2 years. Kizzy and Tucker, shown here, are litter mates out of Xena and Bravo.